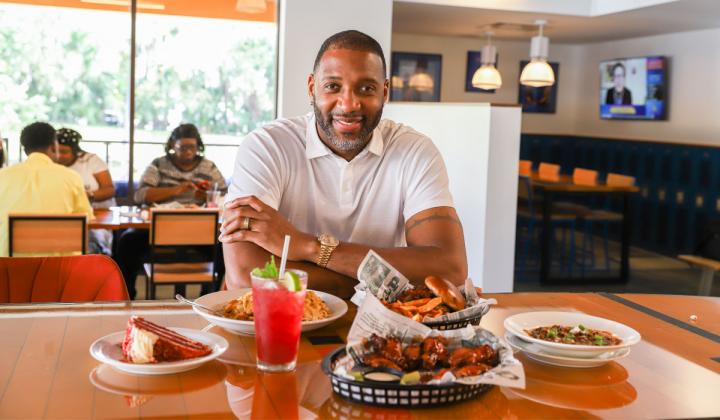 For more than a dozen years, NBA Hall-of-Famer Tracy McGrady won the hearts of basketball fans with his electric ability.

Eight years after his career, McGrady is still winning the respect of fans—but now it’s coming through their stomachs.

The restaurant debuted February 24, but the vision started more than two years ago when Hanson Li, founder of Salt Partners, met McGrady through a mutual friend. The basketball legend shared his interest in reinvesting in his community and creating a place for families to make lasting memories together. Not only did McGrady attend local Auburndale High School, but he also played four years for the nearby Orlando Magic.

“I wanted to find a way to give back to a community that has given so much to me, by creating jobs and starting a business that can help support and encourage young athletes through scholarships, team sponsorships, and mentorship programs,” McGrady says.

McGrady did just that in the form of a 5,000-square-foot venue that boasts 130 seats and a 40-seat oval bar topped with reclaimed basketball flooring. The building is filled with unique sports memorabilia from McGrady and the Magic, including an Adidas shoe wall. The restaurant also features a private dining room with a golf simulator.

Li describes the menu as a “delicious interpretation and construction” of American fare. McGrady worked with the HomeCourt culinary team by starting with foods that have been important to him through the years. Out of those brainstorming sessions came Loaded Amber Beer Chili, Tracy’s Cajun Pasta, and T-Mac’s PB&J Burger, which has been a “five-star item” so far, according to Li. In addition to the unique entrees, HomeCourt offers a beverage program comprising more than 35 local, national, and international selections.

“Trust me, it’s the best burger you will ever eat,” says McGrady, referring to the PB&J Burger. “I wanted to have dishes on the menu that are some of my family favorites, and then give others the chance to establish some of their own family favorites when they come eat at the restaurant. The HomeCourt menu is the kind of menu that has something for everyone in the family.”

Construction began in December, but completion of the project ran into delays once COVID ravaged the U.S. in March 2020. The store was finished last May, but Li and McGrady decided to hold off until there was more certainty surrounding restrictions and the flow of the virus. As Li notes, “you have one chance to make a first impression.”

Patience proved to be a good strategy as opening day saw people waiting before 11 a.m. and customers enjoying the bar into the late hours of the night. It also helps that Florida restaurants have been allowed full capacity for several months. The Sunshine State has administered more than 5 million doses of vaccine and fully vaccinated nearly two million, according to Johns Hopkins University & Medicine. Florida has vaccinated 8.44 percent of its population, which is 10th-best among states and territories. 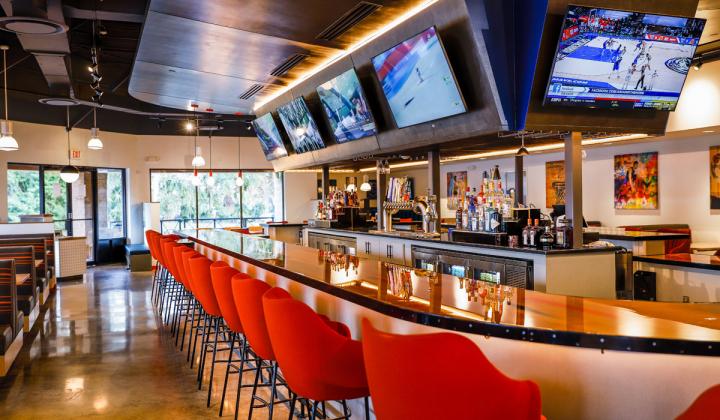 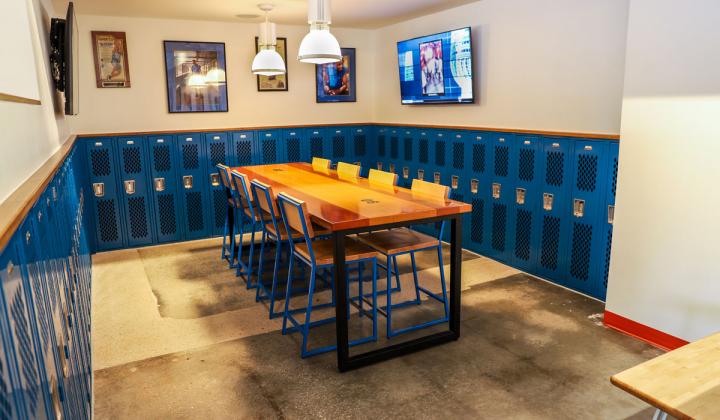 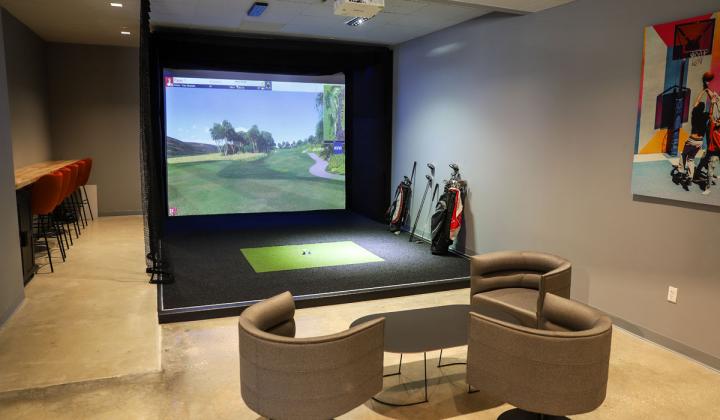 HomeCourt is a restaurant and bar with elements of entertainment, like the above golf simulator.

Suffice to say, the environment has been set up well for HomeCourt to succeed—much better than if the concept debuted last spring. Li says the lack of restrictions has given HomeCourt more confidence in terms of opening, but he adds that the restaurant is still being careful. The concept enforces health and safety procedures, including temperature checks, staff wearing masks at all times, and guests wearing masks when they’re inside the restaurant and not eating or drinking.

“On the one hand, yes, I think the business environment is helpful,” Li says. “But at the same time, at our own store when we can control it, we’re still being careful because the virus is still with us. It hasn’t just disappeared, and we want to protect our staff and our guests.”

Li says HomeCourt is a restaurant and bar with elements of entertainment, but nowhere near the level of Dave & Buster’s or Punch Bowl Social. The primary demographic is both families and adults. Within that, the brand expects to attract many sports fans because of McGrady’s involvement and the plethora of televisions. Going forward, Li says HomeCourt hopes to leverage its budding relationship with the Lakeland Magic, a minor league team based just 10 minutes away.

The idea is to encourage consumers to come watch games, but the brand isn’t doing it to the point that it alienates families. One of the techniques behind the balancing act is building different zones inside the restaurant where younger guests can hang out. Kids are able to check out Nintendo Switches and gather on a set of bleachers while adults watch the game and enjoy their meal.

“We tried to build a restaurant that gives you what you are looking for from a sports bar in terms of great TV, and the drinks and food, but at the same time, not be a turn off to a family that wants to come in and celebrate or just have a good time with the family,” Li says.

Li says the “McGrady” name has helped with marketing and brand awareness, but the value goes beyond just his playing career. McGrady didn’t go away for years and never come back—quite the opposite. He fervently supports his alma mater and founded the The Tracy and CleRenda McGrady Foundation, which supports a number of charities.

The restaurant is also not an ego play, Li notes, which is why it’s called “HomeCourt by Tracy McGrady” and not “Tracy McGrady’s HomeCourt.” The effort is truly about creating jobs and cultivating a gathering place—that’s the point Li and McGrady tried to bring home as local media showed up in full force for the restaurant’s opening. 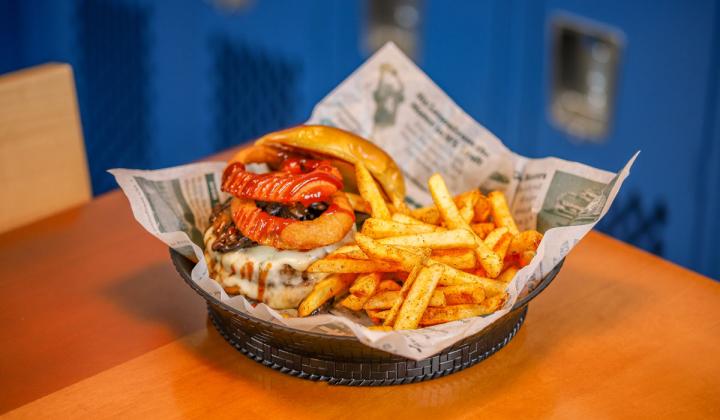 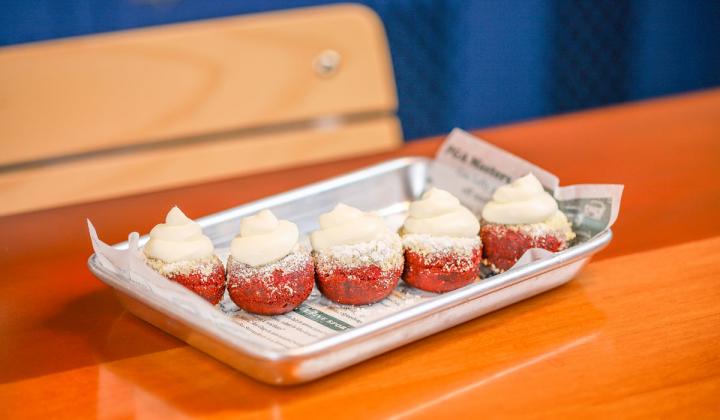 There’s an expectation that the concept can expand to multiple locations across Central Florida.

“There is a lot of goodwill with the name because of Tracy’s good work in the community throughout these years,” Li says. “So I would say that, yes, the McGrady name certainly carries a lot because he’s from there and he’s famous, but at the same time, he’s authentically done a lot of great work within the community, so that community embraces him back.”

To meet the accelerating demand for convenience, HomeCourt offers takeout and has integrated third-party delivery platforms. The brand hasn’t turned on those third-party options yet, however, because it wants to first focus on perfecting the in-restaurant experience.

As the menu was developed, the culinary team was meticulous about creating products that can travel well. Li believes the off-premises program should provide an incremental boost once its fully unleashed.

“I think that’s one that we as a whole industry, we wrestle with, from neighborhood joint to fine-dining restaurants,” Li says. “And I think it’s a reality that all of us had to figure out some off-premise to survive this one last year. But I think the exciting thing is that whatever we have figured out over the last year could be an ongoing revenue stream as we enter back into the ‘new normal.’”

Although there is still much work ahead with HomeCourt, Li says there’s an expectation that the concept can expand to multiple locations across Central Florida in markets like Tampa, Orlando, and other towns along I-4. One of the ideas is to potentially work with other athletes to bring a HomeCourt to their town. Li also envisions an event-based program where guests can check out a Nintendo Switch and long onto a server to play games against each other and against customers at other stores.

No matter how HomeCourt proceeds into the future, McGrady says it will be a team effort—a concept that HomeCourt personifies to the fullest.

“When you’re playing on the court, it’s all about the teamwork, and when you’re opening a restaurant, it’s the same way,” McGrady says. “The teamwork is what made this possible. Working with my business partner, Hanson Li of Salt Partners Group, gave us the ability to build a team of experts that really brought my vision to life. This restaurant is a reflection of who I am, because I want my legacy to be a legacy of giving back to a community that helped get me to where I am today. That’s what HomeCourt is—a team giving back to a community.”

Not written by Prakas & Co. Shared and published by Ben Coley – https://www.fsrmagazine.com/author/ben-coley-0